In “Le Marche” existed since the 16th century a good theatrical tradition. It has improved qualitatively between the end of 18th   century and the first years of 19th century, existed since the 16th century. The building of theatrical structures of various dimensions has contributed to the development of a true architectural tradition. The Theatre represented the "status symbol" of the society of that time, and a meeting place not only for the aristocracy and the emerging classes, but for all the people.

Fermo owned a small structure, called “condominium theatre”, in the "Sala Grande" of the “Palazzo dei Priori”. In the last three decades of 18th century it was recognised the necessity to build a theatre with a suitable architectural structure.

The construction of the "Nuovo Teatro Dell’Aquila”  has been long and full of difficulties. The citizens of Fermo have participated to it with interest. In the 1774 the “Consiglio di Cernita” decided to identify a suitable site for the theatre.

The chosen place was “next to the road “gironale”, (the current Via Mazzini)  and precisely the area oriented southwards, past the Palazzo Apostolico del Governo”, as mentioned in the minutes of the Consiglio di Cernita. This conditioned the development of the original architectural structure that had the long side of the Theatre, overlooking the street, leaving the side facades undefined.

The original structure of the theatre factory was built between 1780 and 1790 by the master builder Luigi Paglialunga, following the aproject of Cosimo Morelli. The original drawings are not available, but his economic reports and descriptions of the works make continuous references to his project cartographies. The structure of the theatre resembles the design of the “Teatro dei Cavalieri Associati of Imola”, work by the architect Morelli.

The initial structure respected the canons of the 18th-century theatre with an elliptical-shaped room, 105 boxes and a stage, divided into three parts, as attested by the non-autographed drawings kept in the town library. The two so-called “fabbriche annesse”, i.e. the factories adjoining the theatre are represented in the plan. One of them is called "della Nobiltà" and had to contain the entrance room, located towards the “Palazzo del Governo”, and the other called "dei Musici", to be realized on the side facing the Girfalco.

The construction works of the theatre where often interrupted for economic reasons and for the considerable disagreements that arose regarding the construction of the building. It contained the entrance to the theatre, located on the side facing the “Palazzo Apostolico”, where there was the old tower, which belonged to the fortification walls of the Girfalco.

Of the original 18th-century decorations of the room there is no trace left. However, the documents of the time specified that they had to be realised “in painting and not in relief”, and from this we can infer that they were in “fake marble”, as it was common in the theatres of that time.

On September 26, 1790 the first performance took place "to give an idea of our Teatro Dell’Aquila, for what concerns the machinery and the paintings, finally concluded, and to try the lighting".

The official inauguration took place in August 1791 with the representation of the drama "The destruction of Jerusalem" by Giuseppe Giordani.

In 1791,  the works were not completed. Of the "fabbrica della Nobiltà" had been realized, between 1791 and 1793, only the ground floor, two floors above and the 18th-century connecting staircase, that we can still admire, by Paglialunga. His works are attested by autographed drawings kept in the Archivio di Stato of Fermo. From its construction  the use of this part of the was uncertain. The building was in fact rented in November 1793 by the lawyer Vincenzo Falconi. He used the whole complex as his residence with the obligation to leave the rooms of the first floor free during the performances.

In 1793, the “fabbrica dei Musici” was completed and, in September of the same year, a rental contract was drawn up by Candido and Giò Battista Germani. This contract was related to their function as caretakers and to the obligation to leave those rooms and entrances, used by musicians and members of the company, for theatre use.

Since the  inauguration of the theatre, it was clear it was not appreciated by the residents.  Its structure seems to need some substantial changes to the stage such as the reduction of the scene from three stage arcs to one, and the completion of works such as the painting of the scenes and the interior finishes of the room.

After the carnival season of 1792, the theatre was closed. It was reopened to the public only for the carnival of 1796 and then remained unused until 1800.

Between 1796 and 1798 the architect Giuseppe Lucatelli has made some changes, to the stage arc, to the stage and to some interior finishing works such as the pictorial decoration of the ceiling and of some scenes. The addition of twenty other boxes, always proposed by Lucatelli himself, was never realized due to the health problems of the designer.

The theatre was reopened to the public in 1800 and it was used for theatrical performances and for the celebration of the carnival festivities until 1826.

On the night between 23 and 24 January 1826 a fire damaged one side of the room from the floor to the stalls. It compromised the stability of eight boxes next to the second and third level, of a part of the perimeter of the stalls, of the ceiling and of a part of the roof.

To restore the damages, between 1826 and 1830, substantial interventions on the internal finishes were carried out under the direction of engineer Dasti. 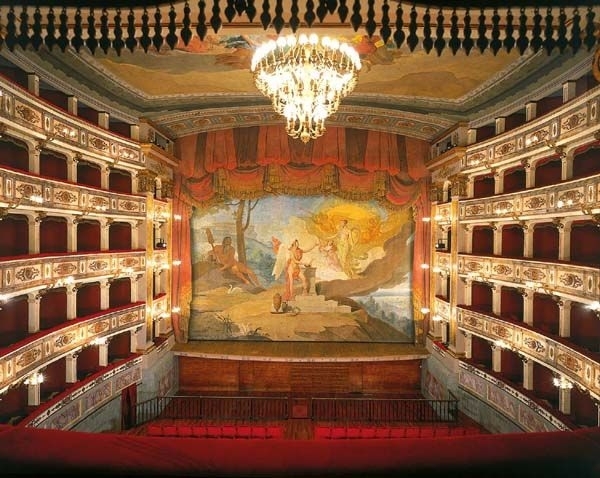 The current form of the room, with 124 boxes, proscenium and one stage arc, is the result of the transformation that took place in those years on the design proposal of the architect Giuseppe Ghinelli, who designed the "Teatro delle Muse" of Ancona and the "Teatro Rossini" of Pesaro.

On this occasion some changes are made: a good part of the roof is redone, the ceiling has been reduced, the boxes have been divided with walls and strengthened, the decorations, the frames, the stuccoes were renovated, the stage arc and the scenery flat were painted, the floor of the stalls was lowered, the lighting system was set up.

The stalls were lowered by about 50 cm. and the slightly sloped floor was built in a "rustic" way. Under the stage a 180 cm slab was made to improve the acoustics.

The decorative finishing work of the parapets of the boxes including the relief decorations, the marbles and all the colours were designed and made by the painter Biagio Baglioni of Macerata between December 1827 and August 1828.

The tempera painting of the ceiling, a refined figurative work  was realised by Luigi Cochetti

The chandelier in gilded iron and wooden leaves, composed of 56 branches, originally supplied with carbide, was purchased in Paris in 1830. It has been recently restored.

In those years, the internal structure took on those 19th-century stylistic features that we can still admire.

The most significant restoration of the theatre interior was carried out from 1876 to 1878, under the guidance of engineer Pietro Dasti, municipal technician, of Count Guglielmo Vinci and engineer Michele Bernetti. With this restoration the paintings and decorations of the room have been recovered and renewed, the painting of the ceiling have been restores, the furnishings and finishes inside the boxes have been redone. The descriptive report, kept in the “Archivio di Stato” of Fermo, confirms that with these last interventions some decorative elements have been redone or added. Such as the zoomorphic figures in papier-mâché, the rosettes in the intersections of the Greek fret. The gildings of the gorges, the pillars, the capitals, the entrance door, the rosettes and the braids of the stage have redone. The interiors of the boxes are also finished. The upper levels are painted, and the walls of the lower ones are covered with red moiré wallpaper.

With this last substantial intervention, the room acquired the stylistic and decorative features that we can still admire.

The interventions realized in the 20th century (1920/1926 and 1961/1966) have solved static problems, improved and renewed the systems (electrical 1903/1914, fire-fighting 1941, steam heating 1909), adequated the safety systems, made distribution changes and works of routine maintenance.

All the maintenance operations of the stylistic-decorative system have taken place for a conservative purpose. However, they have not always been respectful of the previous interventions and of the pictorial aspect, and have modified the overall chromatic impact of the room.

Often the interventions  did not respect the characteristics of the building. This due to the economic difficulties, the bureaucratic events that accompany the approval of each work, the continuous changes of mind, and the alternation of staff roles, jobs in many cases fulfilled in haste.

For all these reasons, the theatre closed again in 1984.

This began a new global restoration of the structure that has lasted up until March 8, 1997, the day of the official reopening of the “Teatro Dell'Aquila”. 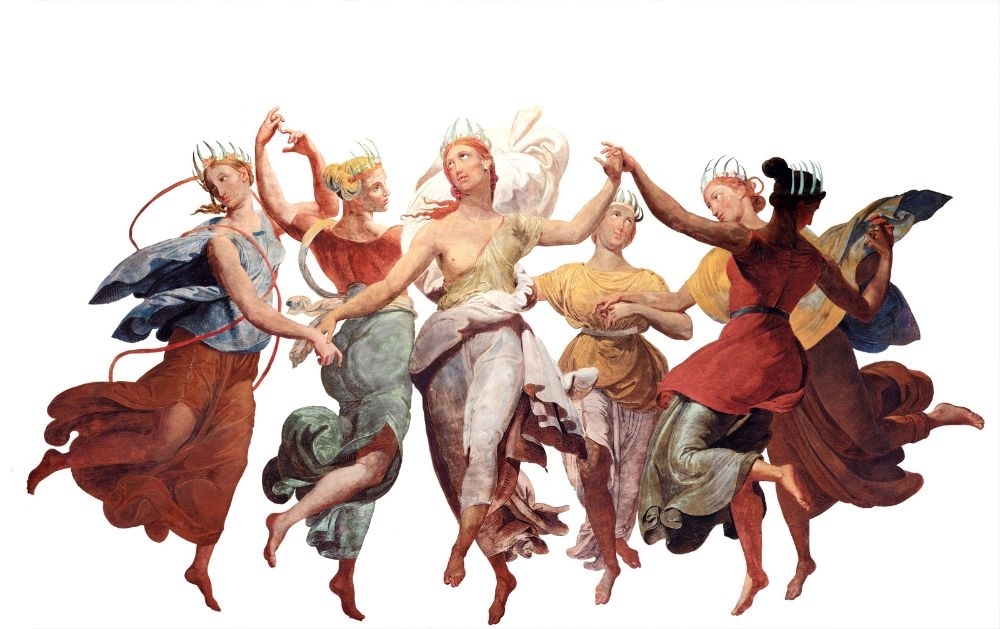 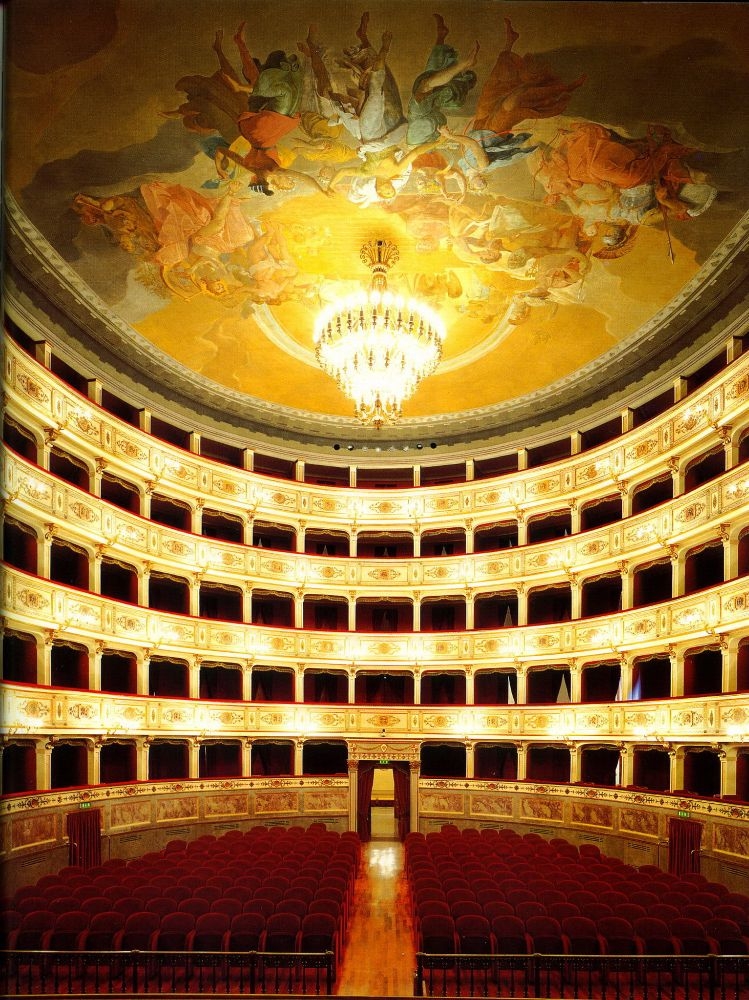 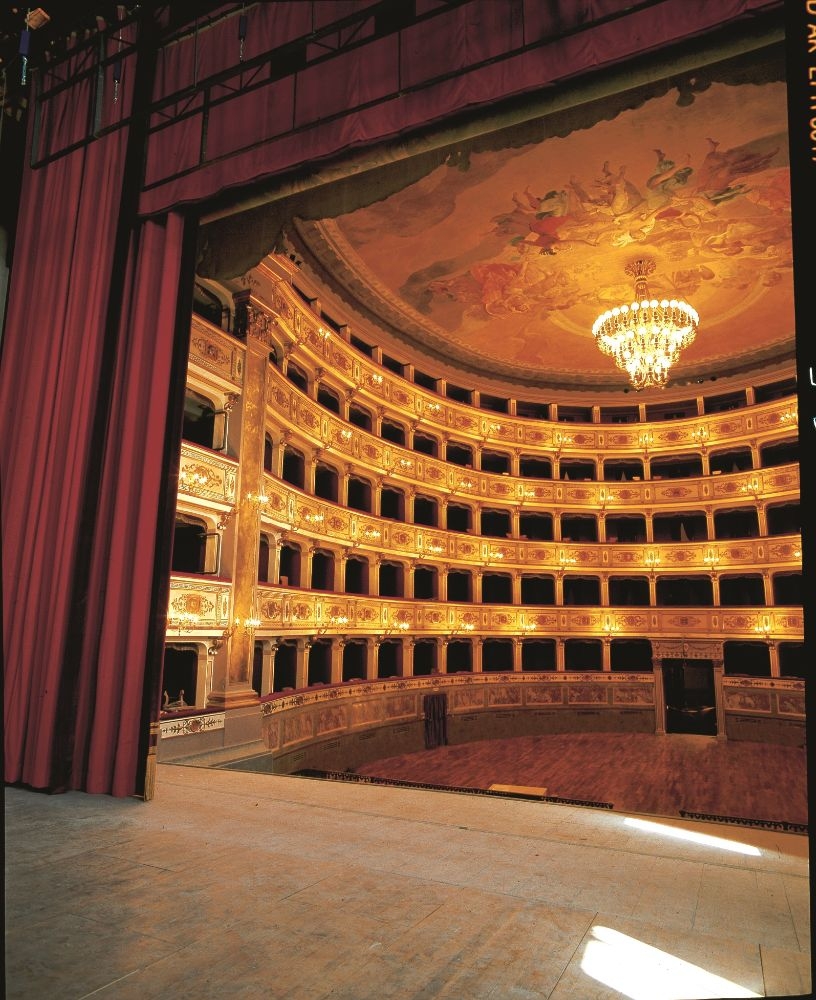 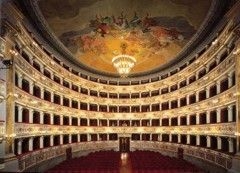 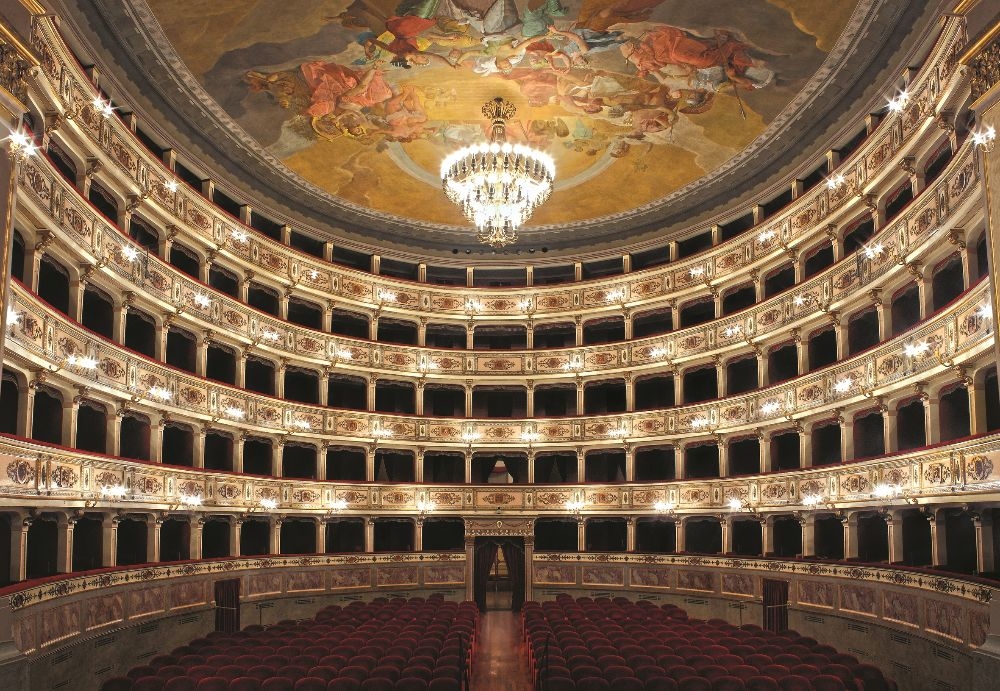 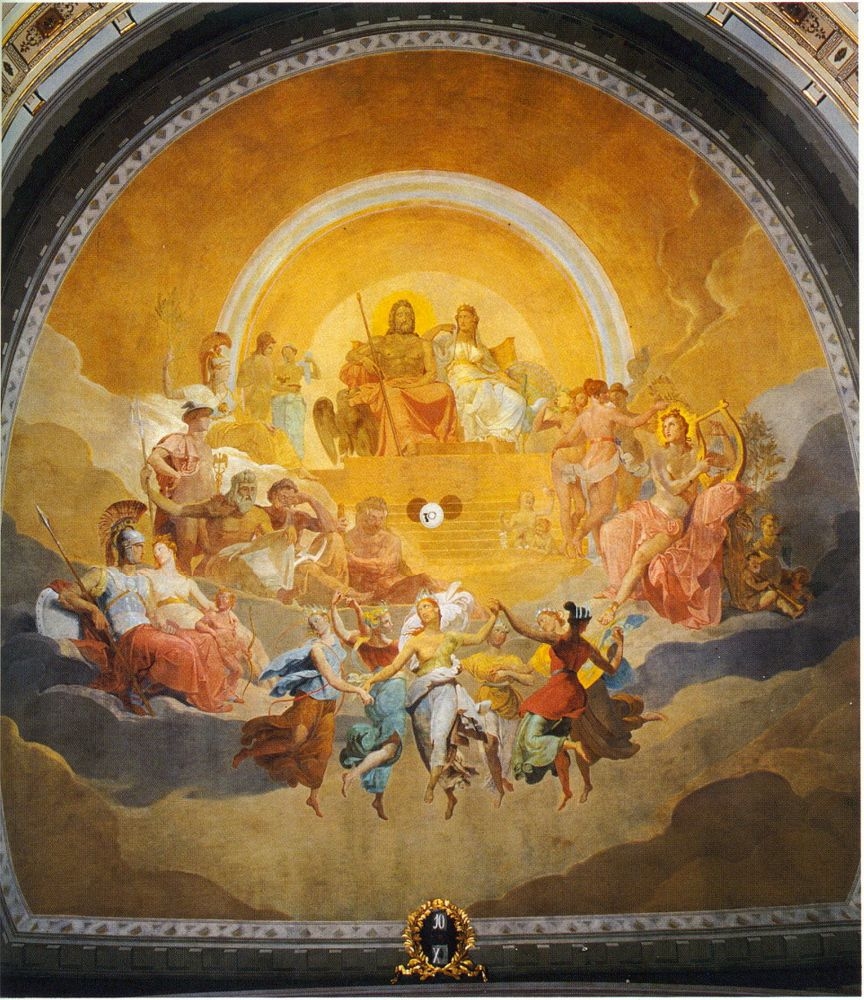 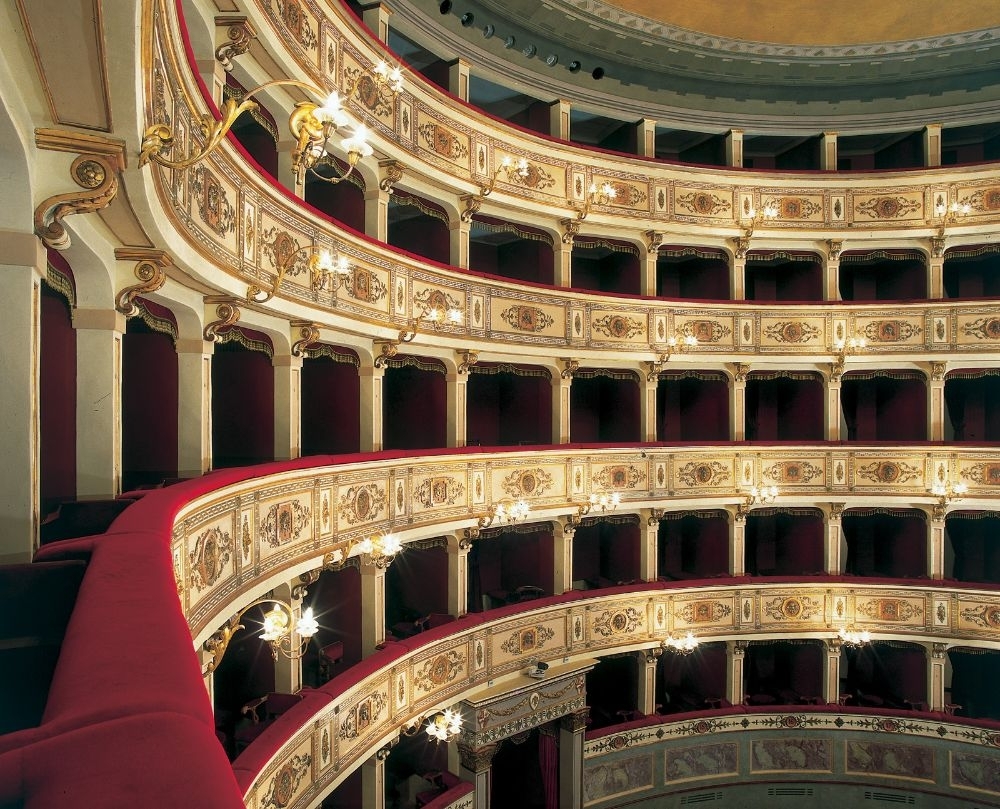 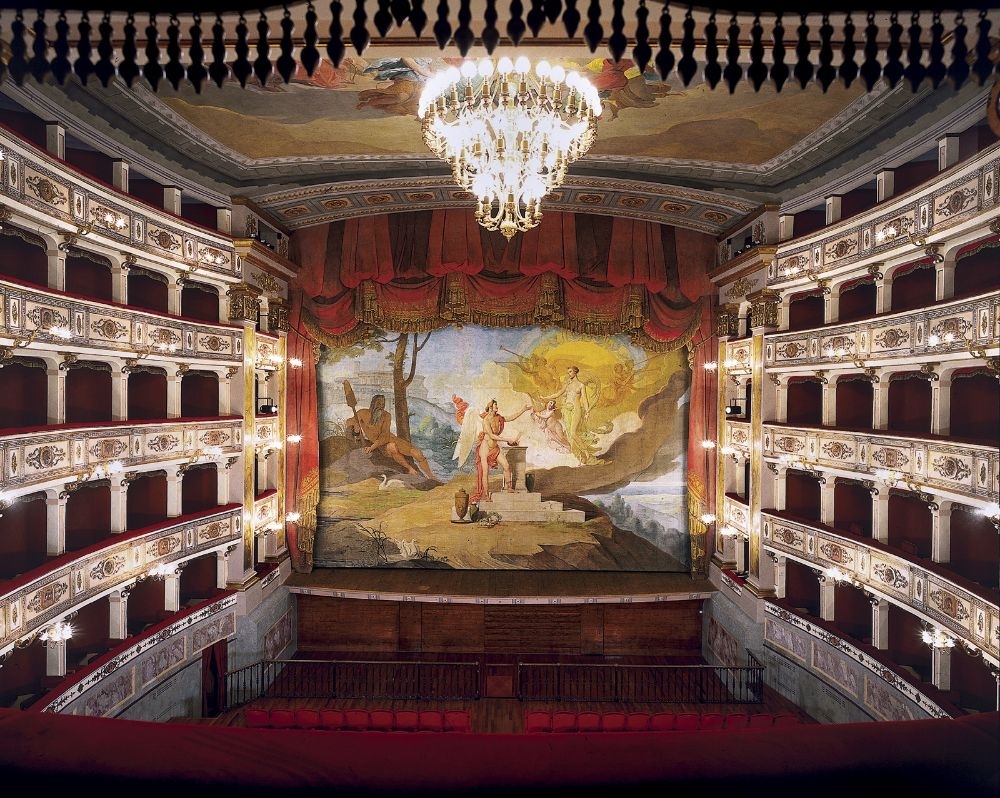