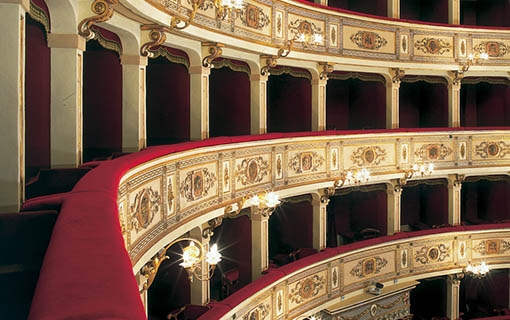 In Marche, since the 16th century, there has been a fine theatrical tradition, which matured between the end of 1700s and the early 1800s, thanks to the building of theatres of various sizes, which contributed to the development of a real architectural tradition. The Theatre constituted a “status symbol” for the society of the time, as a gathering spot, not only for the aristocracy and the emerging middle classes, but for the whole people. In the last three decades of the 18th century, Fermo, which owned a small facility in the “Sala Grande” of Palazzo dei Priori as a “communal theatre”, needed to erect a Theatre with an adequate architecture as well. The construction took long and faced numerous challenges, but citizens kept up interestedly with it: the first evidence of the edification of the “Nuovo Teatro dell’Aquila”, literally translatable as “New Theatre of the Eagle”, dates back to 1774, year in which the City Council chose to determine a suitable location for the Theatre. The picked spot, “next to the curving road, and precisely the half-plane facing south, past the Palazzo Apostolico del Governo”, verbatim from the transcript of the Council, conditioned the development of the architecture, which was born with the main façade, the long side of the Theatre, overlooking the street, while the lateral ones were left undefined. The original project of the building, realized between 1780 and 1790 by master mason Luigi Paglialunga, is surely by Cosimo Morelli: indeed, although his signed designs and cartographies have never been found, they are always referred to throughout the economic and descriptive reports. Also, the plant of the building clearly resembles the Teatro dei Cavalieri Associati, autograph work of Architect Morelli, in Imola. The first building plans, following the canons of the 18th-century theatre, featured the main hall, with an elliptical plan, 105 boxes in tiers and the tripartite stage, as reported by non-autograph drawings, preserved in the Municipal Library. These drawings also included the two, so-called, “fabbriche annesse” (adjacent buildings): one, called “della Nobiltà” (of the Nobility), was supposed to contain the hallway, planned toward the Government Palace, the other, called “dei Musici” (of the Musicians), was meant to be realized pointing toward the wide plain of Girfalco.

The construction, frequently interrupted, was long and problematic, both for economical reasons and for the disagreements about the location of the hallway, facing the ancient donjon of Palazzo Apostolico del Governo, relic of the Girfalco fortification. The Theatre was built by Luigi Paglialunga throughout a decade (1781/1791), while the internal finishing works were carried out between 1788 and 1790; the Stage mechanization was realized by Antonio Pizzoli, while the Hall was refined by painter Vincenzo Mazza, both close collaborators of the Architect Cosimo Morelli. Of these original 18th-century decors there is no trace left, but the documents specify them to have been “painted, not embossed”, presumably in “imitation marble”, as usual for contemporary theatres.

The first play was performed on the 26th September 1790, “to assay the long-awaited mechanization and painting of the new Teatro dell’Aquila and test the lighting”. The official opening was in August 1791, with the representation of “The destruction of Jerusalem”, by Gisueppe Giordani. However, in 1791, the work was not completed; of the “fabbrica della Nobiltà”, only the ground-floor was realized, while the two upper floors, and the 18th-century linking staircase, which we can still admire, were constructed by Paglialunga between 1791 and 1793, as attested by the autograph designs in the State Archive of Fermo. The employ of this part of the Theatre complex has been, since the beginning, “promiscuous”. Lawyer Vincenzo Falconi rented the building as a personal residence, in November 1793, though he was obliged to leave the first-floor rooms available during performances.

In 1793, the “fabbrica dei Musici” was completed as well, and in September, Candido and Giò Battista Germani signed a renting contract, which required them to act as custodians and leave available the enters and spaces used by musicians and theatre troupe.

Still, the Theatre wasn’t completed or fully pleasant to the residents: therefore, since its inauguration, the stage had to go through substantial changes, including its reduction from three stage arcs to one, while the painting of the sceneries and the internal finishes of the hall had to be brought to an end.

After Carnival 1792, the Theatre was closed, opened again to the public only in 1796, to be then left unused until 1800. Between 1796 and 1798, Architect Giuseppe Lucatelli modified the stage arc and the stage and added some features, such as the painting of the ceiling and some scenes. He also proposed the adding of other twenty boxes, but never carried it out, because of Lucatelli’s health issues. The Theatre was again opened to the public in 1800 and employed for plays and Carnival celebrations until 1826.

During the night between the 23rd and the 24th January 1826, a fire damaged a side of the Hall, from the floor to the roof covering, affecting the stability of eight boxes in second and third orders, a portion of the perimeter of the hall, the ceiling and part of the roof. Significant restoration and renovation works were carried out between 1826 and 1830, under the direction of engineer Dasti.

The current shape, featuring 124 boxes, proscenium and one stage arc, is the result of the transformation based on the project by Giuseppe Ghinelli, designer of the “Teatro delle Muse” of Ancona and “Teatro Rossini” of Pesaro. On this occasion, good part of the roof was restored, the ceiling was lowered, the boxes were parted by walls and reinforced, the decors, the frames, the stuccoes were remade, the stage arc and the curtains were painted, the floor was lowered, and the lighting system was fixed.

The floor of the hall was lowered about 50 cm (20 in) and the floor, slightly inclined, was made with bricks “alla rustica”, under the stage a 180 cm (6 ft) excavation was made to improve the harmonic. The finiture of the parapets of the boxes, including the embossed decorations “a mecca”, the marbles and all the colours, were realised by painter Biagio Baglioni from Macerata, between December 1827 and August 1828. The tempera painting of the ceiling is a refined masterpiece by Luigi Cochetti, realised in 1828.

In 1830, the gilded iron chandelier, with wooden leaves and 56 branches, was purchased in Paris, originally powered by carbide. It was returned to the Theatre with the last restoration. In those years, the interior assumed the 18th-century style characteristics we can still gaze at. The most considerable refurbishing of the inside, carried out around the years 1876/1878, under the guidance of engineer Pietro Dasti, municipal technician, count Guglielmo Vinci and engineer Michele Bernetti, renewed the paintings and decors of the Hall, the pictures of the ceiling, the furnishings and finishes inside the theatre boxes.  The descriptive evaluation relating to these works, preserved in the State Archive of Fermo, confirms that, with this latest intervention, some decorative items were added or replaced such as the zoomorphic figures in papier-mâché and the rosettes at the intersections of the meanders, regilded the gorges, the pillars, the capitals, the entrance door, the rose windows and the tresses of the stage arc. The interiors of the boxes were also refinished, the upper orders were painted and the lower orders were covered with moiré red wallpaper. With this last substantial change, the hall assumes the stylistic-decorative characteristics transmitted to us up to today. The interventions carried out in the 20th century solved static problems (1920/1926 and 1961/1966), improved and updated the systems (electrical 1903/1914, fire-fighting 1941, steam heating 1909), precariously adapted the safety systems, made layout changes and ordinary maintenance works. All the maintenance interventions of the stylistic-decorative system that followed have been conservative, but not always respectful of the intervention techniques and of the pictorial aspect and changed the overall chromatic impact of the Room.

Thus, the Theatre building, since its first public opening, has continuously undergone redrafting, minor restorations, structural and functional adjustments. The ever-present financial burdens, the bureaucratic issues to endorse the works, the persistent reconsiderations, and the urgent, quickly done works have often resulted in interventions which were disrespectful towards the peculiarities of the structure. Therefore, in 1984, the Theatre was closed again. A total restoration began and lasted up until 8th March 1997, day of the official reopening of “Teatro dell’Aquila”.

The Theatre between the 18th and the 19th centuries

The ideal trip through the history of “Teatro dell’Aquila” began on 26th September 1790, day of its first “probationary” opening with the representation of the play “Abel’s Death”, by Giuseppe Giordani. In August of the following year, the Theatre was officially opened, with “The Destruction of Jerusalem”, again by “Giordaniello”; the full-fledged Theatre activity, however, started with Carnival 1796. Reports from the 19th century depict the Opera Season as the City’s pride, so much that there was great regret when, in 1821, the shortage of funds didn’t allow performances. Anyhow, in August, three Rossini’s operas made up for this disappointment: The touchstone, The Italian Girl in Algiers, Cinderella.

The audience was particularly demanding. In the records from 1861, during the Winter Opera Season, spectators showed such a strong disappointment towards the poor acting of the company representing Don Pasquale, by Donizetti and Florina del Pedrotti, to the extent that plays were discontinued and the Theatre was shut down. As to the grace of the spectators’ outfits, mundane reports wrote: “…great elegance of the ladies of Fermo. I have counted myself 64 fairly revealing dresses!…”. Furthermore, of great relevance was the program, which frequently featured new plays, just a few months after their performing in Paris, London, Saint Petersburg, and other European capitals: great artists were familiar with Fermo, thanks to the Theatre.

Puccini, for instance, was present on 17th August 1886 for the representation of his first youth work Le Villi, and when, later, La Bohème was performed in August 1896 (regional premiere, in Fermo), on the occasion of the inauguration of the Polesio aqueduct, just six months after the premiere of the "Regio" in Turin. The success was massive, directors and artists were followed in triumph outside the theatre and Puccini himself wrote to Fermo to show his gratitude. Other great names were present at the representation of works, such as Giuseppe Garibaldi who, on 17th January 1849, attended a comedy by Cesare Trevisani. The young Arturo Toscanini assisted to Verdi’s Orefici, staged in 1888, and expressed great admiration for the theatre and for the perfect execution of the opera.